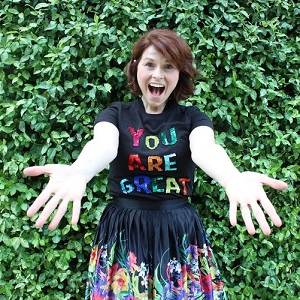 Jorjeana Marie is an award-winning television writer and actress most recently doing both on the Disney show Mickey Mouse FunHouse. She is also a nationally touring comedian opening for Richard Lewis and Kathleen Madigan and the author of Improv for Writers (Penguin Random House/Ten Speed Press). You may have heard her voice on Nickelodeon, Disney or narrating over 400 audiobooks for authors including Meg Wolitzer, Nina La Cour, Jacqueline Woodson and Gayle Forman. She has earned a prestigious Audie, more than a dozen Earphones awards and been named one of the best YA voices for consecutive years. Publishers Weekly calls her “Pitch Perfect”. Paste Magazine named her one of their favorite narrators and Audiofile Magazine calls her characters “Hilarious!” She is the voice of the New Nancy Drew Diaries and AudioFile says “Jorjeana Marie captures the essence of what makes Nancy Drew such a timeless fictional icon”. As an actress, Jorjeana starred in the pilot “Listen to Grandpa, Andy Ling” with Randall Parks and Elliott Gould.

Other writing credits include being a staff writer on Tab Time, the forthcoming Dew Drop Diaries for DreamWorks, Mickey Mouse and the Roadster Racers for Disney, Robot Trains for Netflix and Gumibear for Cartoon Network. Her desire to create work for herself led to becoming an award-winning playwright, creating and performing three one-woman shows in NY and LA: “Ally, MaryJane & Me”, “NY, I Love” and “JoJo and Friends” – a sold-out solo sketch show with animation, puppets and stand-up. With an endorsement from Daisy Rock Guitars, Jorjeana performs ‘micro-songs’ in her act.

While she shares her passion for improv by teaching and speaking at Disney, Google, CBS/Scriptwriter’s Network and Cartoon Network Studios, she is often involved in many charitable organizations as a host and comedienne including: Gilda’s Club, Comedy Cures, Comedy Fights Cancer, Paul Newman’s Double H hole in the Wall and Young Storytellers. She is currently working on her own comedy special (more puppets!), writing her next book and trying to keep crumbs off the countertop.