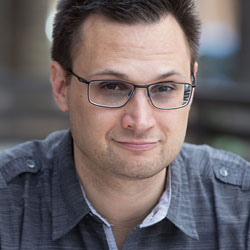 Nathan Makaryk, above all other things, hates writing bios about himself.

Nathan’s debut novel NOTTINGHAM was released in August 2019 by Tor/Forge (US) and Bantam (AUS), and its sequel LIONHEARTS followed in September 2020.

Nathan is a theater owner, playwright, director, actor and improv comedian, living in southern California. None of these pay very well, so he also has a real job teaching audio systems networking software to people who have no idea he’s also a novelist and theater guy.

He likes dogs and scotch because of course he does.